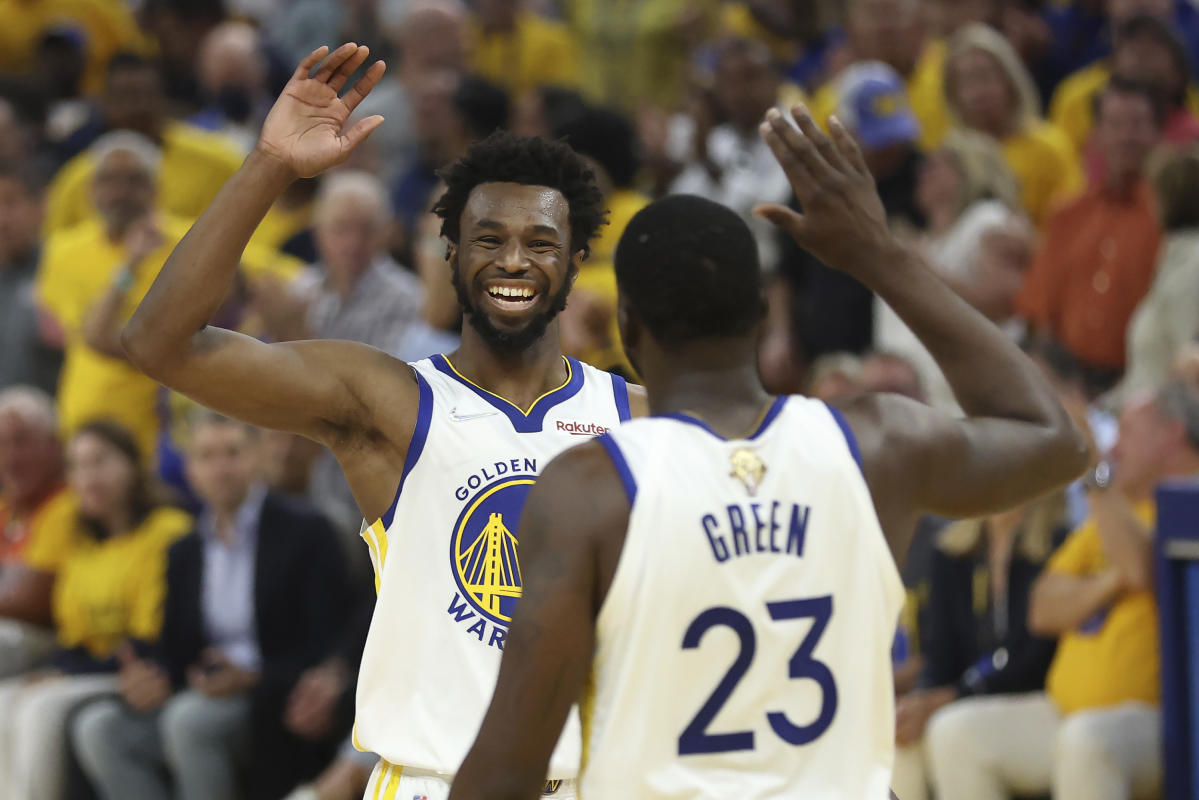 SAN FRANCISCO — Steve Kerr was a valuable reserve who stepped into the spotlight 25 years ago on this very day, afterward joking he “bailed out” Michael Jordan in the Game 6 clincher of the 1997 NBA Finals.

Considering Jordan’s “Flu Game” was days before that, it seemed apropos for history to repeat itself with Kerr’s Golden State Warriors truly coming to Stephen Curry’s aid in the aftermath of his virtuoso performance.

The dynasty, once on its last legs, has been rehabilitated, strengthened and fortified. The dynasty, easily believed to be built on otherworldly shooting and flash, obscured the grind and smarts of its founding members.

The dynasty, once dismissed as dead, is alive and well.

Curry was due for an off night, and it finally arrived. But right on time, the Warriors found the vulnerable spot in the game, but the weary Boston Celtics kept poking until they collapsed.

Another 48 minutes separates these Warriors from their fourth NBA title in eight years after a 104-94 Game 5 win Monday night, taking a 3-2 lead at Chase Center.

Curry’s outrageous streak of 132 consecutive playoff games with a 3-pointer ended, along with another ho-hum mark, 233 consecutive games overall. But as has become custom in this era, if you take a chunk of flesh from them, they seemingly come away better for it — ending the Celtics’ playoff streak of winning seven straight games following a loss.

The Celtics have almost a perverse pleasure in not caring, in placing themselves in adverse situations — taking it close to the edge only to pull back and chuckle at the potential peril, the way a toddler looks down a flight of stairs before slyly laughing at you for believing danger was ahead.

Danger is at their doorstep now, again blowing a golden opportunity they’ll likely kick themselves for in the offseason with careless turnovers, bad shots and some fatigue starting to settle in after two seven-game playoff series entering the Finals.

“I just thought our force, our pressure, our help was there all the time,” Kerr said. “We just didn’t allow a lot of openings. And our rotations were good, and then we flew out to shooters.”

Getting here — the Warriors’ 103rd game of the season, the Celtics’ 105th — means the novelty has been replaced by disdainful familiarity and free space is limited. These series aren’t often pretty as they progress, the adjustments too subtle to notice.

“The deeper you go in the series, you just know each other so well,” said Curry, who scored 16 with eight assists against just one turnover. “Yeah, might not be the most free-flowing situation or the prettiest high-level skill out there, but it’s just grinding it out.

“That’s what the Finals is all about.”

The struggle is romanticized when there’s distance, but in real time, who’s more comfortable being uncomfortable determines the victor compared to who plays the best under ideal circumstances.

Aside from a stretch of eight straight triples, a Finals record, the Celtics shot 3 of 24 from distance and their main ball handlers — Jayson Tatum, Jaylen Brown and Marcus Smart — contributed for 13 of the Celtics’ 18 turnovers.

“When we’re at our best, it’s simple ball movement,” Celtics coach Ime Udoka said. “I think the third quarter showed that. The drive and kick was beautiful, was working, getting guys wide-open shots. Like I said, I don’t know if it was fatigue [that] affects the decision-making a little bit there, or just physically don’t have the burst to finish it off.”

But it’s the Warriors who pushed them to this intersection — immaturity and emotion — and they’ll continue to squeeze. Short of one sterling quarter, the Warriors have dictated the terms of engagement the last two games, and the Celtics’ talent is so overwhelming it was almost enough to take a critical lead headed back home.

When Jordan Poole’s banking 35-footer to end the third reclaimed a Warriors’ lead, it didn’t feel like they could dig themselves back from the brink again.

Tatum (27 points) and Brown (18 points, nine rebounds) were stymied by their own decisions and the Warriors’ ability to wait for the inevitable collapse. Andrew Wiggins again glued himself to Tatum and wouldn’t give an inch — staying the course after Tatum finally began to emerge after an underwhelming start to the series.

Wiggins is a problem for which the Celtics have no counter, with 26 points and 13 rebounds following his 17-point, 16-rebound outing in Game 4. If there are any similarities with the “strength in numbers” crew from 2015, squint at Wiggins and you’ll catch the side profile of Andre Iguodala — miscast as a franchise changer but perfectly spotted as a do-everything type who fits right in, talented enough to be a leading man when Curry is smothered or battling the standards of his own brilliance.

Grabbing Wiggins in a trade for D’Angelo Russell early in 2020 was a silent catalyst for this franchise turning itself around. On its face, it appeared the Warriors wanted Minnesota’s protected draft pick that became Jonathan Kuminga, but it augmented a depleted cast of versatile wings.

“That trust has been building for two and a half years now since he got here. A lot of people looked at the trade like, oh, that’s another piece they can move,” Draymond Green said. “We looked at the trade from the very beginning like that is a guy who can fit next to a healthy group absolutely well.”

Green pointed to his 2016 Olympic teammate, Miami Heat hard-ass Jimmy Butler, as the greatest endorsement for Wiggins, relative to his reputation in Minnesota as a talented underachiever.

“We all know how Jimmy Butler is,” Green said. “If you have any softness to you, Jimmy don’t like you.”

Implied in that is Green saying the same thing, feeling like he could press a button inside of Wiggins to get the best from him. And Green began looking more like a better version of himself, jumping the passing lanes while also beginning to take advantage of lanes presented to him.

With eight points, eight rebounds and six assists, he was unsung but loud before fouling out — a role followed to the letter by Gary Payton II, who looks worlds away from the reserve who writhed in pain due to a fractured elbow in Memphis two rounds ago.

Payton took advantage of every inch — cutting backdoor as a safety valve on offense while getting underneath the bodies of bigger Celtics on defense, another grimy dimension to this Warriors team.

“Gary plays bigger than any other 6-2 player I’ve ever seen,” said Klay Thompson of Payton II, who scored 15 with five rebounds and three steals. “His ability to slide and stay in front of the ball, obviously we know where that came from, his pops.

“Draymond got us going with his pressure and heart. I love going to battle with those two guys. They’re just gritty, throwback type of players.”

It isn’t a replay of 2015, but the Warriors can smell a familiar scent — and they probably smell a little desperation in the Celtics, backed into a corner they didn’t want to choose.