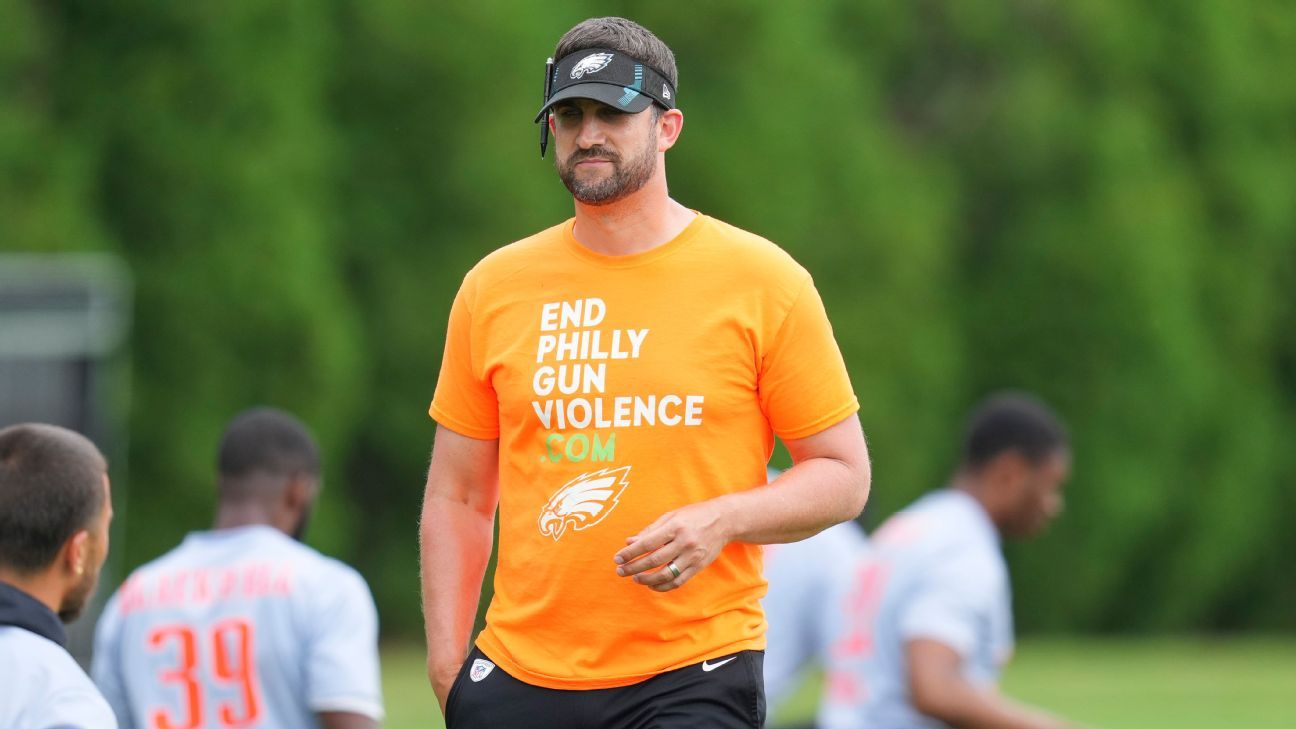 PHILADELPHIA — The decision on whether to hold a final Philadelphia Eagles practice this spring ostensibly hinged on wide receivers coach Aaron Moorehead catching a punt.

Coach Nick Sirianni likes to incorporate friendly competition wherever he can, so at the conclusion of Wednesday’s OTA session, he had Moorehead, the former Indianapolis Colts wideout, and linebackers coach Nick Rallis shagging punts to determine whether a light, Phase II-style practice Thursday would be canceled.

“He dropped the first one,” Sirianni said. “Nick Rallis dropped the next one, and then Aaron came back and caught the third one, which you would expect from a guy that played with Peyton Manning and played in a Super Bowl.”

With that, the players were sent off to their summer break even earlier than expected. And the decision to cancel the final practice probably had more to do with team philosophy.

The Eagles have scaled the on-field portion of their offseason training program way back. Teams are allowed to hold 10 OTA practices as well as a three-day mandatory minicamp during Phase III, the part of the offseason where 11-on-11 and 7-on-7 drills are permitted. Philadelphia joined the AFC champion Cincinnati Bengals as the only teams that declined to schedule a minicamp, while holding a league-low six of a possible 13 Phase III practices. Sirianni opted not to conduct 11-on-11 drills during those six practices, preferring to focus more time on fundamentals in individual drills to lay a proper groundwork for training camp.

The Eagles represent a group of teams opting to lighten players’ offseason workloads. Earlier this week, Jacksonville Jaguars coach Doug Pederson announced that most veterans would be exempt from attending minicamp. The New England Patriots, San Francisco 49ers and New York Giants are among the teams that cut their minicamps short.

“The guys are in good spots,” said Pederson, the former Eagles coach who was able to hold an extra minicamp in April since it’s his first year at the helm in Jacksonville. “So I felt that it was the right time to give them a little extra rest before we get ready to get cranked up in July.”

The primary driver for the Eagles is health. They finished 12th in Football Outsiders’ adjusted games lost metric in 2021 (76), a sharp improvement from their ranking of 30th in 2020 (128.1). The Eagles have been in search of answers to their player health concerns since 2017 — a search that has included multiple shakeups to its medical and training staffs in recent years. They modified their offseason schedule last year after consulting with veteran players, doing away with minicamp and team drills during OTAs, in part as a response to the expansion of regular-season games from 16 to 17. Sirianni said in April that the team believes its change in approach was a factor in staying relatively healthy in 2021.

There are several arms of the operation that informed the decision to pull back, including the medical staff, strength staff and sports science department.

“I’m listening to them, but I also have a feel for what the team needs as far as, hey, we need five more plays on 7-on-7 here, we need 10 less minutes of individual here.”

While these lighter offseasons could benefit overall health, it’s also possible they impact performance. The Eagles started 2-5 last season before hitting their stride late and grabbing the final NFC wild-card spot with a 9-8 record. It’s hard to know how much the lack of reps in the offseason factored into their slow start. This season may shed further light, as Sirianni, now in Year 2 as Eagles head coach, leads a roster currently featuring 30 players who are 23 years old or younger.

Whatever price they pay for the lightened workload, the Eagles believe the benefits outweigh the drawbacks.

“We’re comfortable with … where we are, with the amount of time that we’re spending in this offseason,” Sirianni said.