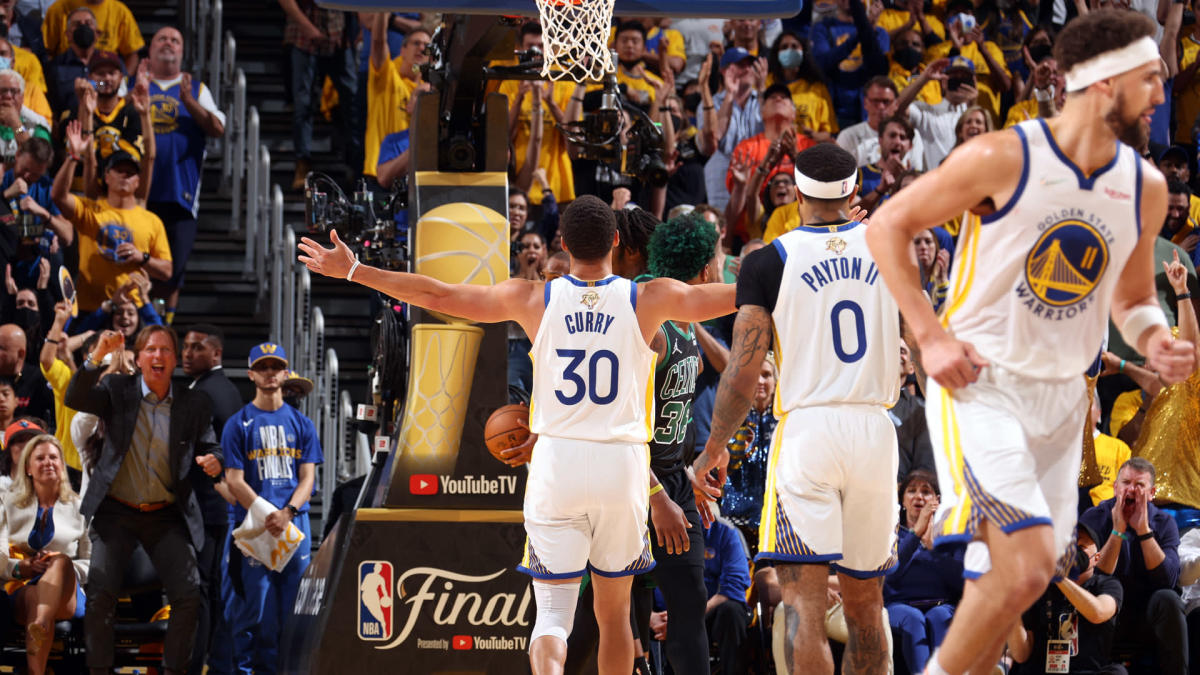 SAN FRANCISCO — Steph Curry through the first four games of the NBA Finals, while facing the best defense in basketball, was averaging 34.3 points while making 50 percent of his shots from the field and 49 percent of his 3-pointers on nearly 13 attempts per game.

Even the greatest shooter of all time can have an off-night here and there. He’s earned that, too, especially after keeping the Warriors’ season alive with his 43-point performance in Game 4. Curry finally turned down the heat and went cold Monday night in Chase Center, scoring only 16 points on 7-for-22 overall.

His streak of making at least one 3-pointer in 233 straight games between the regular season and playoffs finally came to an end after failing to connect on nine tries from long distance.

“I think Steph was probably due for a game like this,” Steve Kerr said to reporters Monday night. “He’s been shooting the ball so well that, at some point, he was going to have a tough night. But we’ve got a lot of talent and a lot of depth that can make up for that, and the guys did a good job of that tonight.”

They certainly did, which along with Andrew Wiggins’ latest sensational performance, should be the story of the night. Curry carried the Warriors up to to this point. It was time his teammates picked him up, something they promised to do in recent days, and they answered the call.

Steph’s 16 points are his lowest scoring total in the series, and his fewest amount of points in a Finals game since scoring 11 in Game 3 of the 2018 Finals vs. the Cleveland Cavaliers. Just like four years ago, the Warriors came out victorious, 107-97, despite a down performance from their brightest superstar.

Now they’re only one win away from winning their fourth title in the last eight seasons, and proved they can come out on top when Curry’s shot is clanking out.

“The fact that everybody stepped up — Wiggs, [Jordan Poole], [Klay Thompson] hit some big shots,” Curry said. “[Draymond Green] found his life and spirit and the way he impacts the game. We could withstand going 9-for-40 (on 3-pointers) as a team and me 0-for-9, and still come away with a win.

“Obviously, track record says I shoot the ball better the next game. Looking forward to that bounce-back.”

As Curry looked for his shot to fall, Wiggins took the reigns, continuing to live up to his latest nickname — going from Two-Way Wiggs to Playoff Wiggs. The former No. 1 overall pick has played constant winning basketball throughout the postseason. The past two games, he has taken his overall game to new heights.

Scoring a team-high 26 points and grabbing a game-high 13 rebounds, the quiet and soft-spoken small forward might as well have taken a bow at halfcourt. This was his stage and he saved his best for his closing act.

Wiggins racked up 16 points in the first half, along with seven rebounds. He was then held scoreless in the third quarter and only grabbed one rebound as the Warriors were outscored by 11 points. But in the fourth quarter, he scored 10 points, went 5-for-6 from the field, snatched five rebounds and was a plus-15.

That’s a winner, something Wiggins has been on a consistent basis the moment the playoffs began. He has recorded back-to-back double-doubles and is up to six this postseason.

“It’s something I dreamt about for sure,” Wiggins said when asked if he ever envisioned a night like his Game 5 performance in the NBA Finals. “Being in the league, and this is the ultimate stage. It doesn’t get bigger than this.

“I was out there being aggressive. It was a good game.”

From the opening tip, it was clear Wiggins was bringing the energy and force required for a Warriors win. He wasn’t alone. Green was right there with him setting the tone. Draymond combined to score four points over the previous two games. He scored that many in the first 4:30 of Monday night.

Before fouling out with three minutes left in the game, Green scored eight points to go with eight rebounds, seven assists and one steal. That’s the kind of player the Warriors need from him, and the box score doesn’t do him justice.

The three-time champion resembled exactly that, and now he’s ready to bring that same kind of game back to Boston.

“But you’ve just got to continue to build. Tonight is a great start, and I look forward to going into Game 6 with the same energy and effort.”

Thompson was behind only Wiggins with 21 points, and was an efficient 7-for-14 from the field and 5-for-11 from 3-point range. He averaged 13.0 points and shot 26.7 percent from downtown in the first two games of the Finals. In the past three, he now is averaging 21.3 points and is shooting 42.4 percent on 3-point attempts.

At halftime, Thompson and Poole were 3-for-7 for eight points. In the second half, they upped their aggressiveness and went 8-for-14, combining to score 27 points.

Poole scored 14 points in 14 minutes off the bench. He and Gary Payton II scored 29 points in reserve. The Celtics’ bench as a whole scored nine points.

The Warriors won the “bad Steph Curry night,” one where he was a plus-15 and led both sides with eight assists. He can smell the taste of another ring. Draymond can’t wait to see what Steph has in store come Thursday night at TD Garden.

And this kind of win is exactly what the Warriors needed, on the precipice of being basketball’s very best once more.