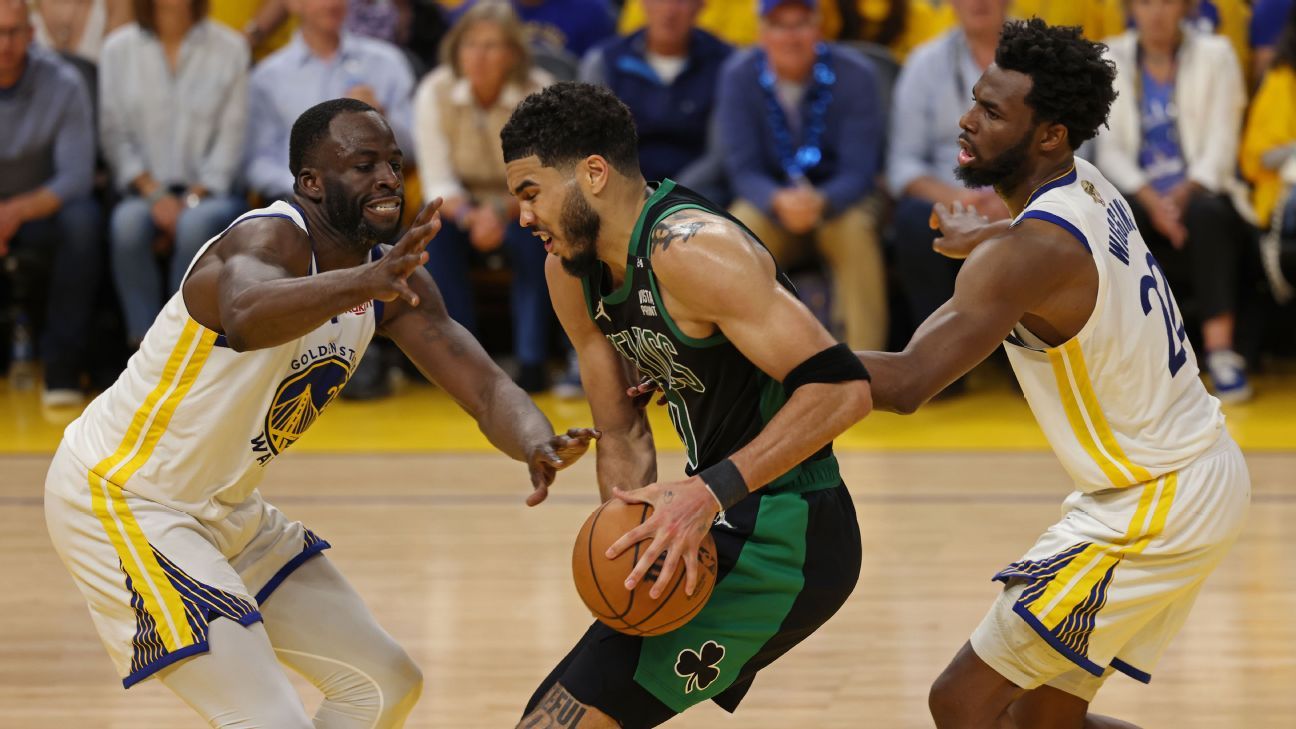 SAN FRANCISCO — The highlights of the Stephen Curry 3-pointers, Robert Williams’ blocked shots and, now, Andrew Wiggins’ dunks, continue to run as the premier moments in the 2022 NBA Finals.

The Golden State Warriors are one win from claiming another title after a 104-94 Game 5 victory over the Boston Celtics Monday night. But the Warriors are not ahead 3-2 because they’re winning the anticipated battle of the series — Boston’s relentless and expertly constructed No. 1 defense going against the historic shooting wizard and his brothers in arms — but because of the exact opposite.

These Finals are being won at the other end of the court, the Warriors’ defense suffocating the Celtics and negating Boston’s game plan.

And that’s how fans who were pouring out of Chase Center Monday night explained it, too, after watching Curry go 0-for-9 on 3-pointers, the first time in four years and 233 games he didn’t make a triple.

“I know that’s the thing people notice at first, consistently, how well I shoot my ball, how I shoot my shots, that flair,” Curry said. “I can’t control the narratives however people talk about the game. When you watch the game, it’s not just about that. … I think we are [the] No. 2 defense for a reason.”

Udoka, the Celtics’ first-year coach, did make some adjustments to his defensive game plan against Curry, namely having his big men crowd him more after screens and employing more switches to discourage the kind of shooting Curry had been displaying in the series.

But he spent more time before Game 5 worrying about Boston’s offense. And as he and his team take the five-hour flight back to the East Coast on Tuesday, he’ll be working on those issues more intently as he prepares for Game 6.

“Again,” Udoka said, repeating himself from last week when he was peppered with questions about Curry. “I don’t know if it was our defense as much as offensive struggles that hurt us tonight.”

When Curry scored 43 points in Game 4 … the Warriors had 107 as a team. Wiggins put up a sublime 26-point effort Monday, which probably could be classified as the best game of his pro career considering the stakes, and the Warriors scored … 104.

In Game 2, their other win, they scored 107. They are averaging 105 points per game in this series, 10 fewer than they scored in the Western Conference finals against the Dallas Mavericks. Golden State is shooting 45% in the series, which is good, but 7% less than the last round.

The Celtics aren’t shutting down the Warriors, but they are managing on that end.

The defensively potent Celtics are on the verge of costing themselves a title … on offense.

The Warriors have dedicated themselves to playing rough — and not just because Draymond Green did some minor pushing during dead balls in the first few games. They are refusing to give Jayson Tatum and Jaylen Brown, the Celtics’ primary ball handlers, much space.

The crowding is frustrating Boston. The turnovers, meanwhile, continue to come in droves.

In Game 5, Boston had 18. In a stat that has become ubiquitous, the Celtics are now 1-7 when they turn it over 16 times or more in the postseason and 13-2 with fewer.

The Golden State Warriors lead the Boston Celtics 3-2 in the Finals, with Game 6 Thursday (9 p.m. ET, ABC) in Boston.

Every Boston player knows this; Udoka has displayed it in bold type on the scouting reports. Still, they cannot stop themselves.

“We’re hard to beat when we don’t turn the ball over,” said Tatum, who is closing in on the playoff turnover record after adding four to his total Monday to make it 95 in 23 games. “Clearly, we’re easy to beat when we do.”

When the Celtics get sloppy on offense, they regularly look to the officials for answers. Regardless of the accuracy of the calls, it’s not a trend that typically helps them. On Monday, they drew two technical fouls, including one from Udoka, who usually tries to get his players to stop whining and get back on defense after they don’t get a preferred whistle.

Udoka was nearly ejected in the fourth quarter when he pointed at referee Tony Brothers in anger and Brothers confronted him instead of tossing him.

“Probably something we shouldn’t do as much,” Udoka said of the complaining. “And we all did too much.”

The Warriors were routinely in the top five in defensive efficiency between 2015 and 2017 when they won their first two titles with this core. But they finished outside the top 10 in three of the previous four seasons, even when they reached the Finals in 2018 and 2019. They rededicated themselves to it over the past year, with current defensive coordinator and newest Sacramento Kings head coach Mike Brown leading the effort.

The defensive push includes improvement from Wiggins, who has proven to be a potent stopper since getting traded to Golden State, and from Curry, who has gone from being a defensive weak spot to a player who can more than hold his own. This has been a common discussion point over this season, but has never been more valuable than these past two weeks.

It seems the Curry matchup the Celtics are having more difficulty with isn’t when he has the ball, but when the Warriors guard is on defense.

“They were trying to attack [Curry] over and over again and he held up pretty well,” Warriors coach Steve Kerr said. “The key to our game is defense.”

Fatigue could be playing a role, too. After going seven games the past two rounds, the Celtics will have to do it again to win the title. In a telling stat, Tatum is shooting 56% in the first quarters during the Finals but just 24% in the fourth, including 2-of-10 over these past two losses.

But Boston’s issues go deeper than that. The Celtics often have struggled to execute under pressure offensively throughout the season. It’s a flaw that has been frustrating for a team that is so close to its ultimate goal. It’s dangerously close to being a fatal one.

“We’ll regroup and bounce back,” Tatum said, referencing a tone he has gone to as the Celtics have faced elimination games throughout this run. “I’m sure of it.”