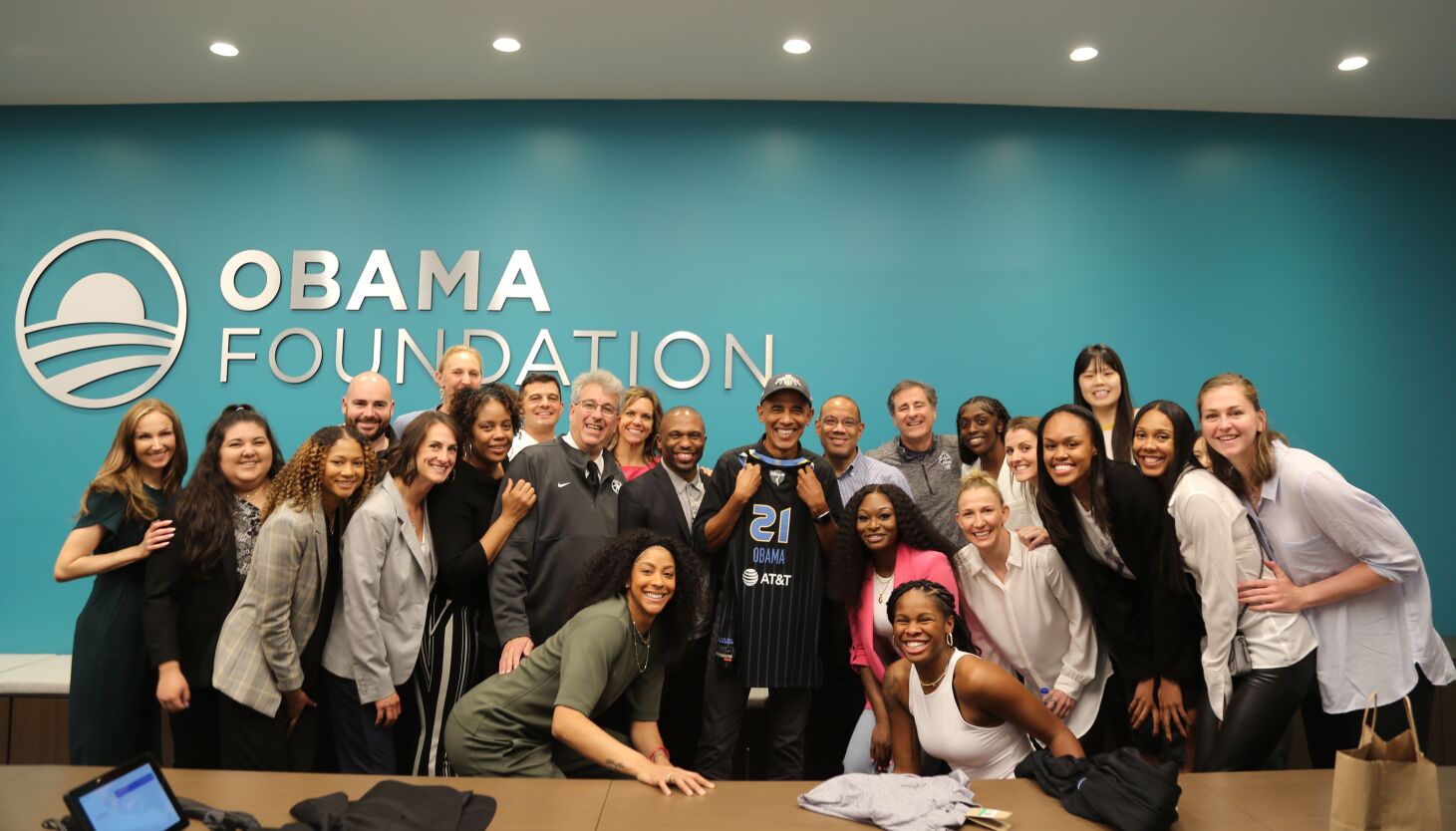 Phones were not permitted in the Sky’s meeting with former President Barack Obama on Tuesday in Washington.

Kahleah Copper said it wouldn’t have mattered if they had their cellphones because Obama’s presence easily commands your full attention.

What did carry some weight was their fashion choices. Copper and Dana Evans had 30 spare minutes and decided to pop into a nearby store in search of an “impressive” look. When Obama greeted the team, their style was validated when he shook everyone’s hand and said, “I hope I’m not underdressed.”

The entire experience felt deeply personal to the players and staff because of Obama’s knowledge of the league, the Sky and the attention he gave to each conversation.

“You can tell when someone genuinely cares about the WNBA and continuing to further the league and continuing to want more for women,” Copper said. “He didn’t just want to meet, he knew and understood our backgrounds and who we are as people. You have to respect that.”

The team began their day with a visit to the National Museum of African American History and Culture. They were able to walk through the entire museum, including its Sports: Leveling the Playing Field exhibition, which explores the contributions of sports figures on and off the field.

The meeting was planned by ownership but did not take the place of being honored at the White House. There are still expectations that the Sky will visit President Joe Biden, but the league said a date hasn’t been confirmed.

The Sky’s first title and their pursuit of a second were topics of conversation between the 44th president and the reigning champs. Obama’s love for Courtney Vandersloot’s game was a talking point as well.

“I thought it was dope for him to singularly point her out and say how much he loves watching her play point guard,” Evans said. “That goes to show you he’s actually watching our games and knows us.”

Since the meeting wasn’t documented, with the exception of a few photos, Evans said everyone was relaxed and open.

Obama was gifted a personalized No. 21 Sky jersey.

“I am incredibly proud of these athletes,” Obama shared on social media. “Who represent the best of our city — on and off the court.”

The team outing kicked off a three-game road trip that began with the Sky’s 84-82 loss to the Mystics on Wednesday night.

The Mystics, who played without Elena Delle Donne for the second half because of back stiffness, had the Sky on their heels through three quarters. Rebekah Gardner’s play on both ends of the floor kept the Sky within striking distance, and a three-point barrage by the Sky sparked a fourth-quarter comeback.

The Sky shot 15.3% through three quarters but went 4-for-8 in the fourth. Down two points with six seconds to go, Candace Parker got the final look. She caught the ball in the paint turned right on her defender, took two dribbles with her left and put the ball up off the window and missed the shot to send the game to overtime.

She led the Sky with 16 points, nine rebounds and three assists. Copper and Gardner each added 12.

“I normally have a clock in my head,” Parker said. “I didn’t know how much time I had. We can debate whether the previous possession or that one was a foul. But getting to my left hand and going left, I’ll take it.”