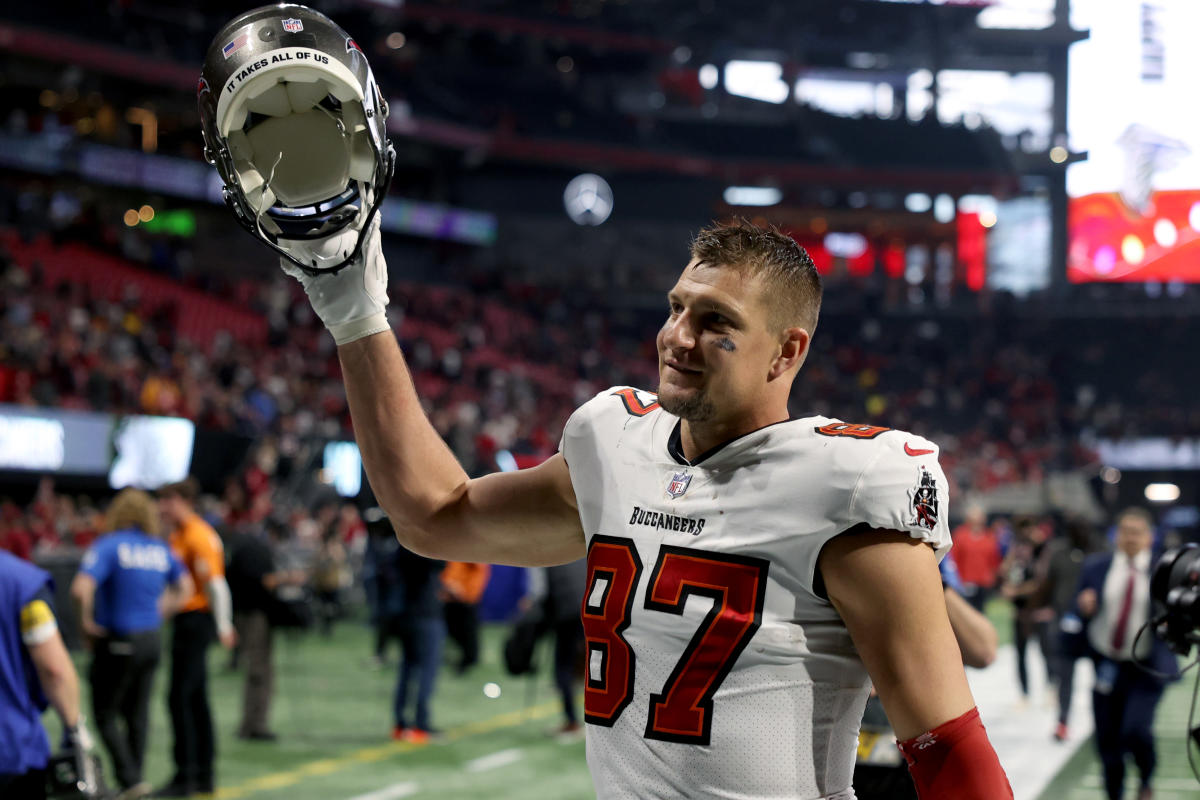 For a second time, Rob Gronkowski is calling it quits.

The five-time Pro Bowl and four-time All-Pro tight end known as much for his big personality as his proficiency on the football field announced his retirement from the Tampa Bay Buccaneers.

In college, I was asked to write about a dream job opportunity that I wanted to pursue and where the location would be. Every time I had to write about my future, no matter what, I picked being a professional football player. For that assignment though, we had to pick the location. So I wrote that I wanted to play in Tampa for the Tampa Bay Buccaneers, for many reasons, the sunny weather being #1. I completely forgot about writing this report until 2 years ago when I had the opportunity to join the Tampa Bay Buccaneers. And let me tell ya, the journey in Tampa over the last 2 years has blown away what I originally wrote about in college, big time. And for this, I want to thank the whole entire first class Buccaneers organization for an amazing ride, trusting me to come back to play and help build a championship team. I will now be going back into my retirement home, walking away from football again with my head held high knowing I gave it everything I had, good or bad, every time I stepped out on the field. The friendships and relationships I have made will last forever, and I appreciate every single one of my teammates and coaches for giving everything they had as well. From retirement, back to football and winning another championship and now back to chilling out, thank you to all. Buccaneers 🏴‍☠️ fans, the Krewe, without you guys, none of this is possible, all of ya brought it every game, thank you for all you do. Cheers to what’s next, maybe sailing the seas 🏴‍☠️ Arghhhhhh!!

While he doesn’t top the career list in any statistical category, a strong case can be made that no tight end in the history of football impacted the game more than he did. Antonio Gates and Tony Gonzalez revolutionized tight end play as elite offensive weapons. Gronkowski took the position to a new level while setting the stage for players like Travis Kelce and George Kittle behind him.

A 6-6, 270-pound athlete with elite hands and playmaking ability, Gronkowski was a matchup nightmare stampeding through the secondary. Good luck if you were a linebacker tasked with man coverage or a 205-pound safety hoping to outmuscle him for a jump ball.

When he wasn’t making highlights, Gronkowski’s job was run blocking. He was very good at that too.

More than anything, Gronkowski’s lasting legacy is that of Tom Brady’s top target. Brady is the most accomplished quarterback in NFL history, and he did the bulk of his achieving in New England without the services of an elite wide receiver save a single spectacular season playing with Randy Moss.

After Moss, the list of Brady’s best Patriots receivers reads, in no particular order: Julian Edelman, Deion Branch, Wes Welker and David Patten. With apologies to the Edelman hive, nobody on that list resembles a Hall of Famer.

But Brady had Gronk. And nobody else in the NFL did.

When he joined New England as a second-round pick out of Arizona in 2010, Gronkowski was like nothing the NFL had ever seen. After catching 10 touchdowns as a rookie, he exploded in his second season with a 90-catch, 1,327 yard, 17-touchdown campaign to earn his first Pro Bowl and All-Pro nods.

Injuries eventually took their toll. Gronkowski hobbled through New England’s Super Bowl XLVI loss to the New York Giants after the 2011 season on a high-ankle sprain suffered in the AFC championship. He needed surgery after the season.

The next season, he broke his forearm on two separate occasions, including during a playoff win over the Houston Texans. That injury required multiple operations. He also needed back surgery that offseason. His ailments knocked him out of the first six games in 2013. He lasted seven games before finishing 2013 on injured reserve with a shredded knee that left him with tears to his ACL and MCL. He sustained multiple concussions along the way.

The havoc on his body left reasonable questions whether Gronkowski’s career could survive his physical style of play. He promptly laid those concerns to rest in 2014, the year he truly made his mark on Patriots lore. Gronkowski bounced back from the multitude of injuries to play 15 games, catching 82 passes for 1,124 yards and 12 touchdowns. Gronk was back. He was awarded NFL Comeback Player of the Year for his efforts. He also won his first Super Bowl.

It was the first of three rings for Gronkowski with the Patriots as he developed into the featured star of the second of two Brady Super Bowl trilogies. By the time he was done collecting rings in New England, he’d gained so much clout that nobody batted an eye when he dented the Vince Lombardi Trophy while using it as a baseball bat. It was just Gronk being Gronk. And that was a formula for success.

Gronkowski was a rare bright light in a slog of a 13-3 Super Bowl LIII win over the Los Angeles Rams. He caught two passes for 47 yards on a critical fourth-quarter drive that set the Patriots up at the 2-yard line for the only touchdown of the game. It was a fitting coda to a spectacular career, and Gronkowski called it quits that offseason.

But Brady kept going. And when he went to Tampa Bay, Gronkowski couldn’t resist the lure of another run with his fellow future Hall of Fame counterpart. The warm climate surely helped. Gronkowski came out of retirement. And, of course, the pair won their final Super Bowl together with Gronkowski catching two touchdowns from Brady against the Kansas City Chiefs.

After another successful, albeit ringless season, Gronkowski finishes his career with 621 catches (10th among tight ends), 9,286 receiving yards (fifth) and 92 touchdowns (third). He achieved those tallies in 143 games, just over half the time it took for Gonzalez (270 games) and Gates (236 games) to reach their gaudy career totals. He’s also got a fistful of rings to show for it.

Even though Gronkowski is saying this is the end, it might not be. His agent, Drew Rosenhaus, told ESPN’s Adam Schefter that he’s not sure Gronkowski is really, truly finished in the NFL.

“It would not surprise me if Tom Brady calls him during the season to come back and Rob answers the call,” Rosenhaus said. “This is just my opinion but I wouldn’t be surprised if Rob comes back during the season or next season.”

Gronkowski may be imagining spending the NFL season on his couch right now, but it’s possible we haven’t seen him catch his last Brady pass.